I've been fascinated by something I read a couple of days back. Most cells are microscopic, the largest bacteria is a little under a millimetre in length and the largest amoebozoa (amoeba and similar protists) gets to about 3 millimetres and all is well with the world. These large bacteria and amoebozoa face difficulties with life as giant cells and many of them resort to having a large number of copies of their DNA (In the case of protists multiple nucleoli) in the cell. The giant bacteria can have 100,000 to 200,000 copies of its DNA. 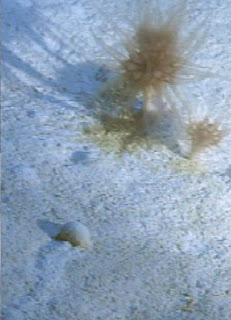 A few days back I read about a recent discovery, an even larger protoist named Gromia sphaerica There's a nicer photo of it on the Discovery web site. This is one weird looking beast, and I'd so like to know more about it.

But wait, there's more. It seems that gromia leaves trails as it crosses the sea floor ... trails that are identical to the pre-Cambrian trace fossils which were previously taken as evidence there were multicellular animals before the Cambrian explosion.

I remember being fascinated when I was much younger by the question "what's the largest cell" ... and the answer was "An ostrich egg", which it was, if in a fugacious way. Only now the answer isn't so simple. Sure an ostrich egg is a lot bigger than gromia, but it turns out there are even bigger candidates. Some seaweeds are made up of giant single cells Caulerpa can be up to three metres long, and it's all one cell! Sir Arthur Eddington was right when he said "Not only is the universe stranger than we imagine, it is stranger than we can imagine." and it isn't just the universe, there's enough here at home to baffle and amaze.