I just stumbled on this amazing photo blog by a Lachezar Karadzhov about whom I know absolutely nothing except he takes great photographs. According to the site he was a finalist in the Best Oceanian Photoblogs 2007 competition for his Lachezar's photo_notes site, and I can well believe this.

As the name suggests, he publishes a photograph of Auckland every day and he's been doing it for around 18 months. My favourite photo (so far) on his site is The corner which shows a cyclist at the corner of Alex Evans and upper Symonds Streets. He's manipulated the photo to enhance the colour of the advertising posters and made the rest of the photo black and white, except for the baleful red glare of two traffic lights.

Well worth a browse and I'll be returning frequently. 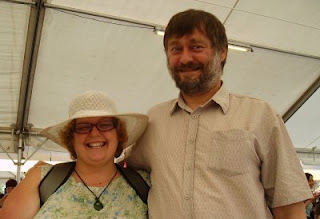 I'm bushed. Tessa & I went down to the waterfront for the Foodtown sponsored Auckland Wine and Food Show. I spent about 7 hours, mostly on my feet wandering around the various stalls, taking in the outdoor entertainment and sampling, sampling, sampling.The entertainment was varied stating with a light jazz act followed my a couple of mediocre pop music acts. Then came three impersonators, the first Brett Wallace as an excellent Neil Diamond impersonator. He looks a little like Diamond in the 70s, but when I closed my eyes I felt I was listening to the real Neil Diamond, especially during his Brother Love's Travelling Salvation Show finale.

I wasn't impressed by Brendon Chase's Elvis Presley I think he should join the real Elvis on the checkout at Foodtown.

The last impersonator we watched was Steve Larkins as Freddy Mercury of Queen he had the moves right, the voice was great and he took the crowd with him. Full marks to him. As we drove home we discussed him and felt it was a shame that a man with his obvious talent hadn't managed to make it big as himself. He certainly had the talent.

Later on, Ben Lomis was booked to impersonate a pop singer, but we were tired and decided to go home. The show was set to wind up with Debbie Harwood about now, but we're already home.

The entertainment is really a side show & we were there to see and sample food. There wasn't much here that was new to me and it doesn't really compare to the much larger Auckland Food Show. It seems that about a third of the stalls were wine or beer, which is fair enough for a wine and food festival. There was a lot of bulk produced & semi-specialist cheese and smallgoods like sausages, and salami, a smaller number of stands with olives, pickles, etc and not a lot else. Tessa felt there were less stalls this year compared to last and I certainly felt there was a lot less variety.

On the other hand, a bonus to Foodtown for handing out mini-fruit kebabs. Very refreshing.